Bel berbunyi / My Alarm Went Off
Pagi-pagi / Early in the morning
Masi ngantuk, kututup mataku lagi / I’m still too sleepy, so I close
my eyes again
Kuteringat / Suddenly I remember
Harus Cepat / I must hurry
Janji buat KTP di Lurah terdekat / I have an appointment to make my ID
Card in the local “Lurah”

Namun terhentak ketika kumelihat / But then I’m shocked to see
Ratusan orang dijalanan yang padat / Hundreds of people on a crowded street
Motor mobil gerobak pun saling sikat / Cars, Motorcycles, and Carts
are on top of each other

Kok slalu macet kayak gini / Why is the traffic always this bad?
Udah lama kok gak bisa diatasi / It’s been so long left unmanaged
Katanya pada mau buat MRT / Did they say that they were going to build an MRT?
Tau gini / Had I known this
Ih ih / Ih ih
Gua pindah ke bali / I would have moved to Bali
ih ih / ih ih
Eh malah macet di s’manggi / Instead I’m stuck in Semanggi Road
(notorious for its traffic jam)

Ku duduk bersama tiga puluh orang / I sit there with 30 other people
Kipas-kipas kita semua kepanasan / We all “fan” ourselves because of the heat
Keringatanpun mulai bercucuran / Sweat is running down everywhere
Dimana / Where?
Ah ah / Ah ah
Petugas kelurahan? / Where is the ID attendant/official ?

Du du du du duit dari mana? / I don’t have enough money with me
Ketinggalan dirumah / I forgot to bring it with me from home
Katanya ku datang besok saja / He says that I should just come tomorrow
Mulutkupun ternganga / In shocked, my mouth opened wide

One word, thumbs up. Eh, itu dua kata ya.. Hihihi

Convenience store, or also known as corner store and corner shop, is a mini market, with the air-con setup and friendly staff, usually selling a range of everyday items such as groceries, toiletries, alcoholic and soft drinks, etc. This store can be found almost everywhere; in gas stations, at corners of intersections, within a housing complex, within a mall, or just on the side of the street. 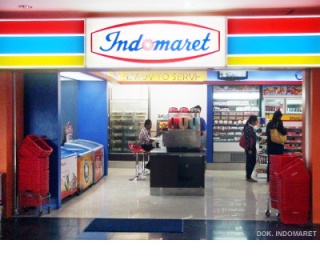 A competing brand, Alfamart, another convenience store similar to Indomaret, is almost always found within Indomaret’s vicinity. No one really knows the reason these two convenience stores are located near to each other, despite their provision of similar goods and service. Rumours have spread saying that both convenience stores have the same individual or corporate owner. However, no one has seemed to figure out the truth.

On the open space outside these stores, some street vendors open their stalls; some sell a variety of fruit juices; others fried snacks or tidbits (gorengan), etc. These vendors may need to pay a rental fee to the store owners.

Technically, Yomart is similar to Indomaret and Alfamart. The only different thing is that Yomart is painted green and yellow.

Other brand established in Indonesia is Circle K. Circle K is segmented for young and teen consumers. Unlike Indomaret and Alfamart, which sell daily necessities, this America-origin store stocks mostly various kinds of drinks, snacks, and cigarettes. Circle K usually opens 24 hours a day and also provides benches outside its premises, for customers to relax and enjoy their groceries.

Circle K has been noted to be the trend-setter of teen convenience store for providing a convenient spot to ‘hang-out’ for its customers. This is why, every night, many teenagers are seen smoking, grabbing a bite, or simply chatting amongst them in front of Circle K.

Seven Eleven (or commonly called Sevel) is the most famous convenience store brand in Indonesia, especially Jakarta. As time goes by, its outlets have been nominated as must-visit places for socialites to hang out. This store operates from 7 am to 11 pm, hence the name “Seven Eleven”.

Not only does it provide groceries, Seven Eleven also offers hang-out spots, equipped with Wi-Fi connection, inside and outside the store. Products available are not like those we may find in Indomaret, Yomart, or Cirkle K, but more to unique beverages and snacks, such as Slurpee (colorful frozen soda), Fake-cheese (literally!), some Japanese meals, and some meals I cannot identify. In addition, this store also sells various kinds of coffees, doughnuts, and even banana flavored dotted condom. What an offer! No, I never bought the condom. A friend of my friend did!

Just so you know, Yogya Express is not a night bus; it’s a convenience store!

I am not sure whether Yogya Express is available in other cities, but I found this convenience store in Bandung. Maybe this store can be found in Yogyakarta instead, since the name refers to the city, Yogya. Who knows!

This store is usually attached to a mall or supermarket. Just like Seven Eleven, this store provides groceries and hang-out spots, equipped with Wi-Fi connection, inside and outside of the store.

Yogya Express, in my opinion, is much more sophisticated in term or products offered as compared to Seven Eleven. This store has nasi kucing (a variation of meals containing a very little amount of rice and some scraps of side dishes – like cat’s meal, literally), various kinds of beverages just like ones in Seven Eleven (minus the Slurpee), soda freeze (Yogya Express’ version of Slurpee), self-service waffle, doughnuts, potato twist, sushi, dim sum, hamburger, hotdog, pancake, French fries, salad, rujak (a combination of fruits poured with either spicy or sweet sauce), spaghetti, sandwich, and instant and prepared meals that can be cooked or heated onsite.

Lawson is the latest brand of convenience store that has recently been opened in Indonesia. It only has a few stores in Jakarta, thus people have not really recognized its presence yet.

This convenience store targets teen and young workers as their main customers. The concept is similar to Seven Eleven’s — hang-out spots and Wi-Fi connectivity.  I personally have never visited this store, so I do not know what it provides. Rumour has it that this Japanese-origin store provides original in-store cooking products such as Oden (is a Japanese winter dish consisting of several ingredients such as boiled eggs, daikon radish, konnyaku, and processed fish cakes stewed in a light, soy-flavored dashi broth), rice balls and porridge.
…
Well, I wonder to what extend the establishment of convenience stores will affect teenagers and young adults in Indonesia.